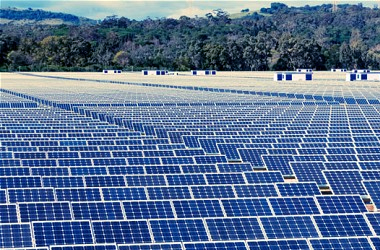 A recent industry study by Kronos, Germany’s leading solar farm developer, suggests that Britain only has a handful of brownfield sites sufficient for large solar panel farms which puts a fresh dent in the governments pursuit of its renewable energy targets. Salvation is possible, but it does not have a pretty face.

In July an application for a 199 panel farm in Land of Outstanding Natural Beauty in Berkshire was approved. Kronos themselves are currently working on proposals that would see a 250,000 panel farm spanning 100 acres of agricultural land in Hampshire which would generate enough power for 30,000 homes. Conservationists are concerned that the Kronos report signifies a loosening of the cork that is currently preventing the solar farm genie from leaving its bottle and blighting the green fields of Britain. Resistance to renewables is not new of course, opposition to windfarms has been well documented in recent years and there are currently around 300 windfarm action groups in the UK.

Nuclear is seen by some as the only catch-all solution, but doubt has been cast on the commercial viability of the latest EPR reactors that will be the cornerstone of Britain’s privatised modernisation programme. There is also considerable uncertainty regarding regulation of the nuclear industry and nuclear waste disposal. Resistance is strong here too. Both the Welsh Assembly and Scottish Parliament are opposed to new nuclear power stations.

Hydraulic fracturing, or Fracking, has recently made headlines despite being commonplace in the North Sea since the 1970s. Now the drills are making their way inshore serious concerns have arisen regarding earthquake risk and water contamination.

Against this backdrop of opposition there is the looming prospect of a power deficit in the UK where demand is stronger than ever. In June 2013 OFGEM issued a warning stating that the risk of power blackouts in the UK within the next 18 months has doubled since a year ago. In that year Britain’s population, which is now the fastest growing in Europe, increased by 420,000 which is two and a half times the increase experienced by Germany. In 1970 the energy consumed in British homes represented a quarter of Britain’s total consumption; it is now a third thanks to the increase in housing stock which is still regarded as woefully inadequate.

It is almost impossible to find a form of mass power generation, renewable or otherwise, that does not come loaded with controversy and opposition. The time at which an unstoppable force (Britain’s power needs) meets an immovable object (the resistance to virtually all forms of mass power generation) is fast approaching and something will have to give.