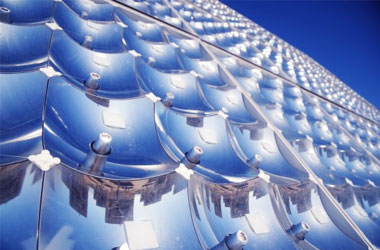 Whenever you see footage of a satellite out in space chances are the solar panels you’re looking at are not the same type of panels you see on roofs or in gardens back here on earth. The PV (photovoltaic) solar panels we have been using here one earth since the 1970s convert roughly 15% of the sun’s energy into electricity. The CPV (concentrated photovoltaic) solar panels often used in space are able to convert up to 44% of the sun’s energy into electricity which makes them three times more efficient.

Why The Solar Panels are Different:

CPV panels are more efficient because they use optics to focus large amounts of sun onto wafer thin photovoltaic surfaces to generate more electricity than traditional PV panels. Put simply, imagine setting up a parabolic telescope, pointing it at the sun (not something we recommend) and then sticking a highly efficient multi-junction solar cell in the eyepiece – that’s basically CPV.

Efficiency gain is just the beginning of the good news. A recent report by IMS Research suggests that although the upfront cost of CPV panels will be more expensive, CPV will cost 30% less than PV over the lifetime of a system because CPV produces three times more electricity. CPV panels will also be up to 3 times smaller than equivalent PV panels which will be great news for houses with small areas of south facing roof.

Solar Panels and The Future:

Large CPV solar power stations are already being developed in Europe, Africa, Asia and North America. Residential CPV is still very much embryonic, but there are companies blazing a trail with experimental designs. If all goes to plan you might just see some CPV systems appearing on houses near you by 2025.