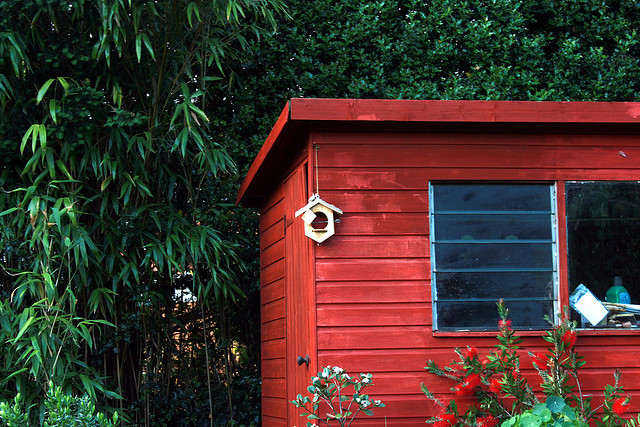 There are plenty of options if you want to light the inside of a shed or outbuilding from the simple to the slightly more complicated. Choosing the right option can be difficult but with this blog post hopefully it’ll be a lot easier!

First off, let’s assume that you have a long garden and getting mains power to the shed (building) would be a pain. Not only do you need to drill holes through your house, you also need to hide the cable, which means a lot of back breaking work digging and (most likely) an electrician. All of this is expensive in both time and money.
Solar is the opposite of all mentioned above. All of the lights sold at The Solar Centre do not need an electrician to install them. This includes the Geo Lighting Kits which are like a mini solar panel array. Also, it won’t cost you anything in terms of electricity because it’ll be self-sufficient.

This Evo 15 Solar PIR Utility Light packs out a big punch for a small light. It is easy to install with a slim solar panel and clip on style bracket. It is PIR motion activated, which means when you open the door (and as long as you are within range: 2m – 6.5m) the light will turn on and stay on all the time you are in there. This is the smallest shed light we have which can also be used as a basic security light. (You could use the higher powered security lights in your shed but it may be a little overkill if it is only a small area!) It is not designed to stay on for hours though, so I would suggest a different light if you wanted to use it for long periods. 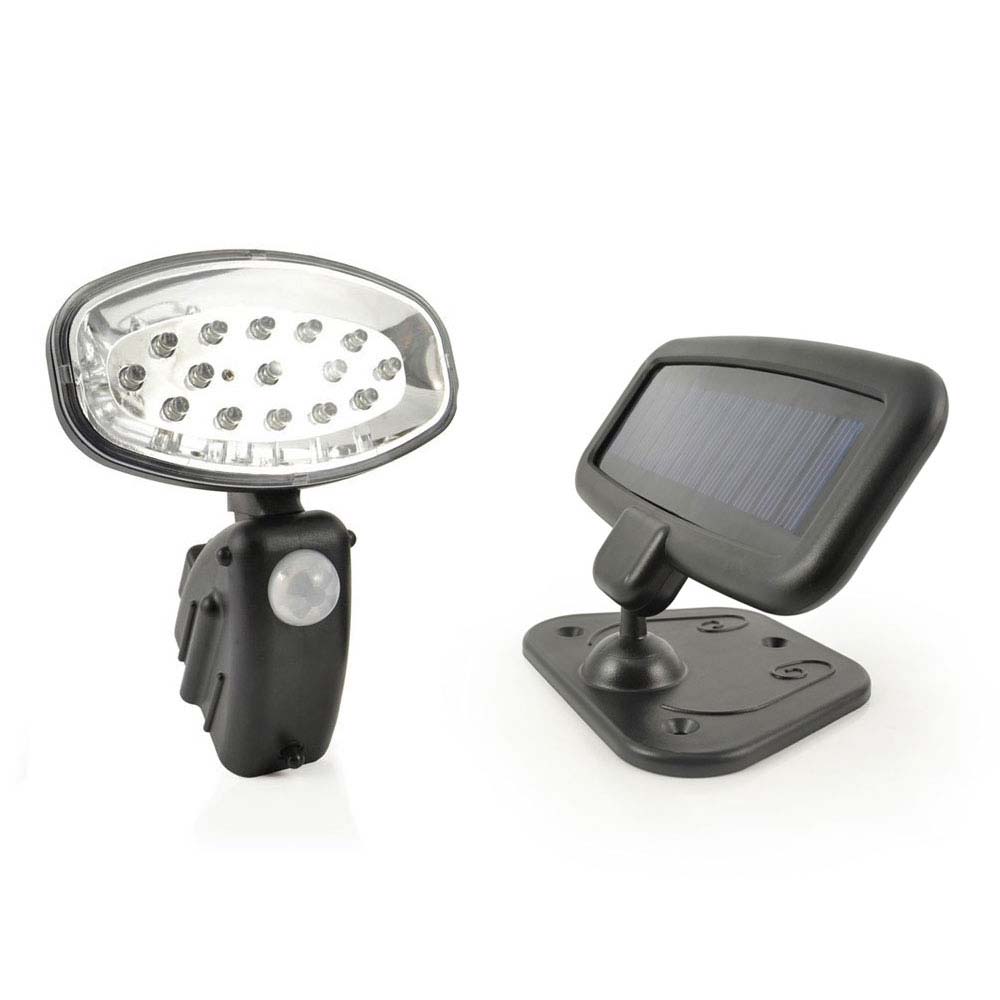 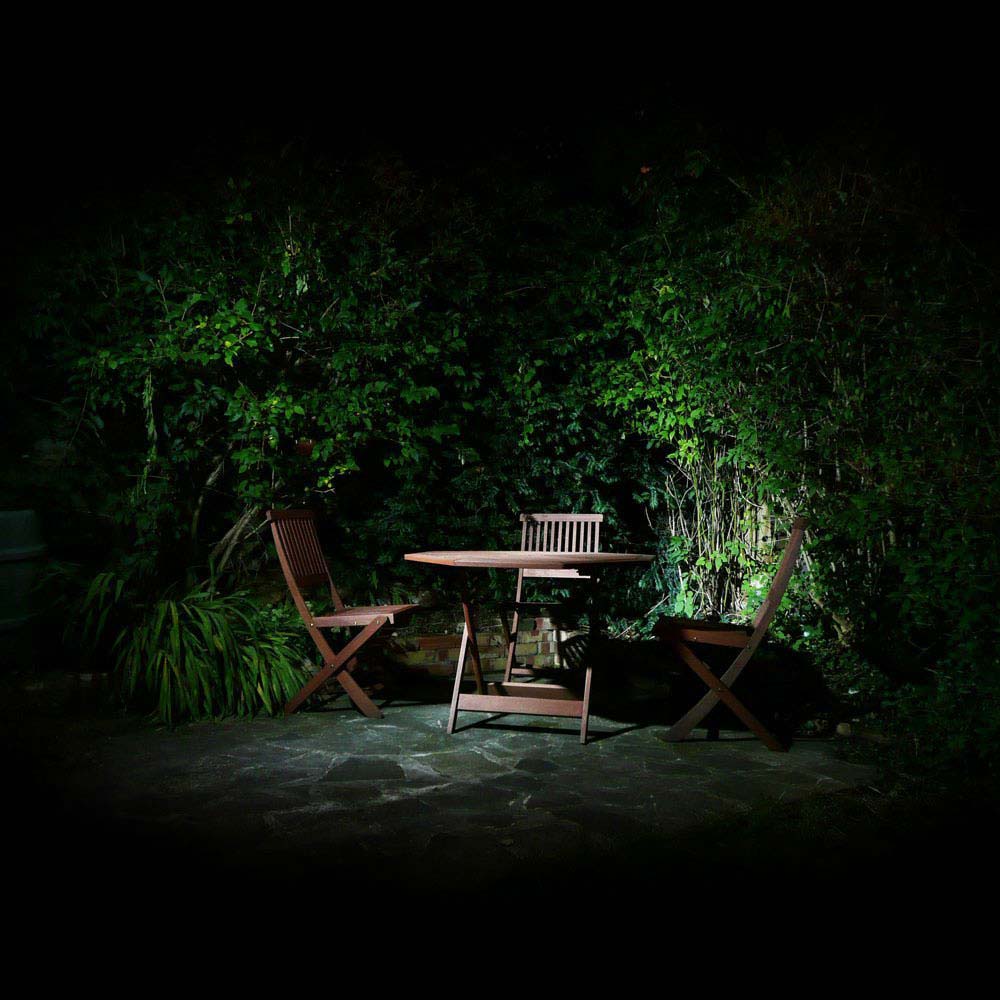 This light will not work during the day. To use it during the day you need to “Fool” it into thinking it is night by unplugging the solar panel which has a lux sensor. This is to stop the light from working during the day when it should be charging. A lot of people use this as a simple security light, for a light over some bins, or for potting sheds.

The Vortex Shed Light is another light that is super easy to install with a clip design. The solar panel can be attached to the top of the shed or building and the disc shaped light part inside. At night, when you want to use the light, simply click the button on the front. The Vortex Shed Light has three settings: all 36 LEDs (super-bright), 24 LEDs (a little less bright), and 12 LEDs (lowest setting). 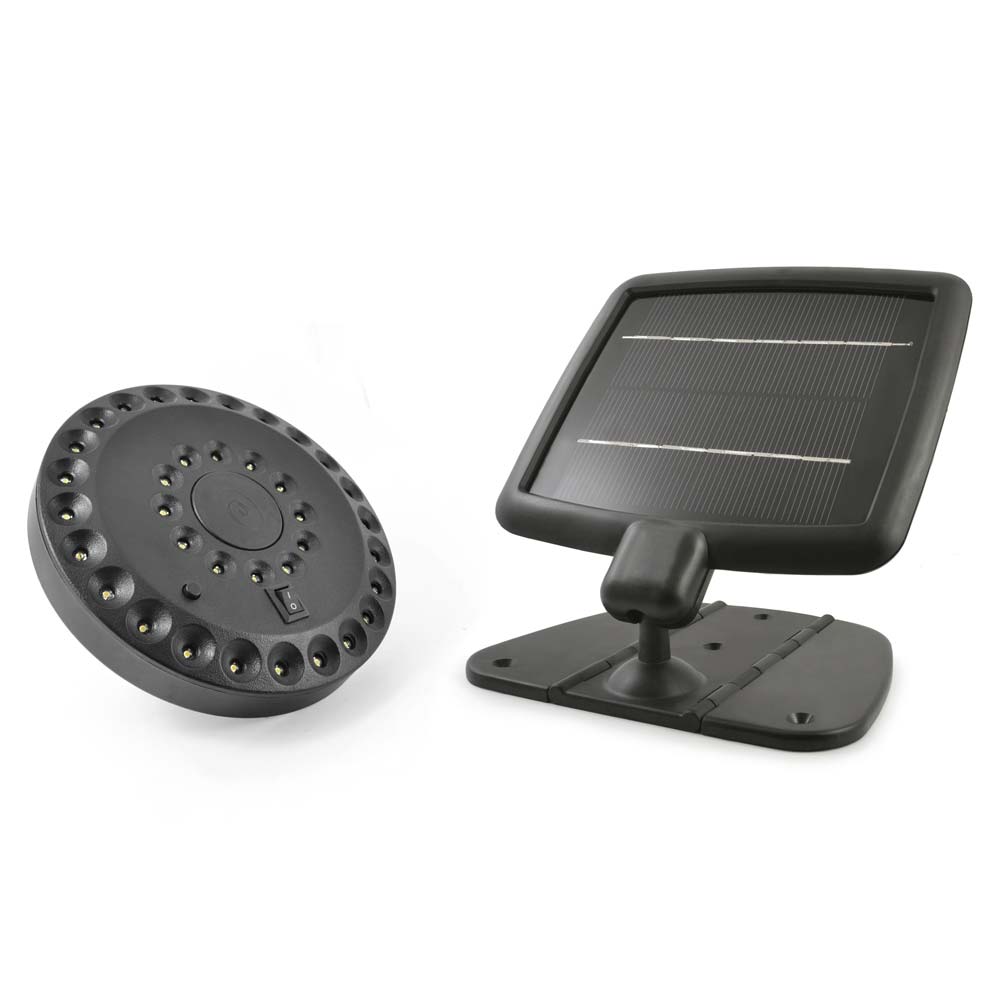 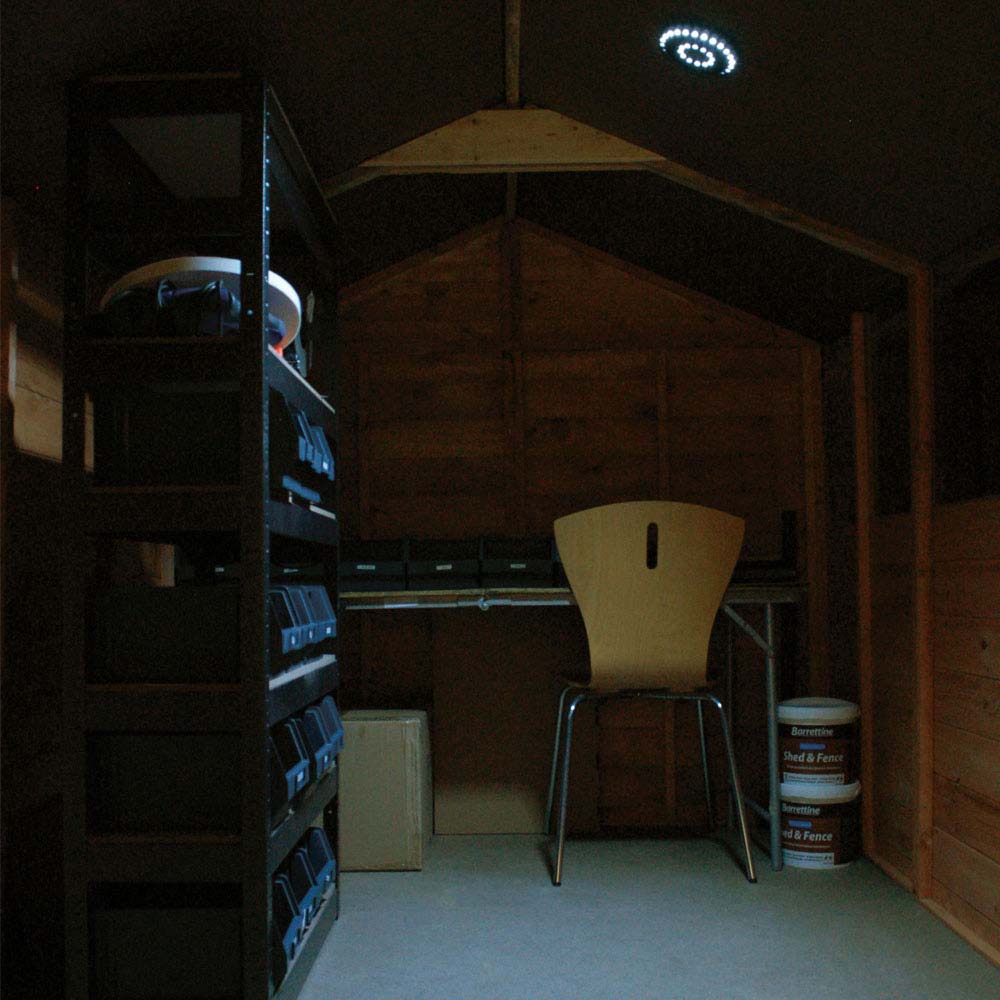 This light also has a lux sensor in the solar panel. To make it turn on during the day follow the instructions above for the Evo15 Solar PIR Utility Light. I would not recommend this light if you wanted to read things (like seed packets, a magazine, etc.) as it is less directional than the Evo15 Solar PIR Utility Light and spreads the light further out to illuminate the room. It can, however, run on a full charge for 7 hours.

The Solar PIR Porch Light is like a hybrid that is between the Evo15 Solar PIR Utility Light and the Vortex Shed Light, as it does a bit of both. It has a PIR sensor in the middle (range is 2m – 6.5m) so it will activate rather than the manual turn on and has a slim solar panel, although again it will only work in the dark (unless you unplug it). It has 360 degrees detection range and installs with the clip design similar to the Evo 15. 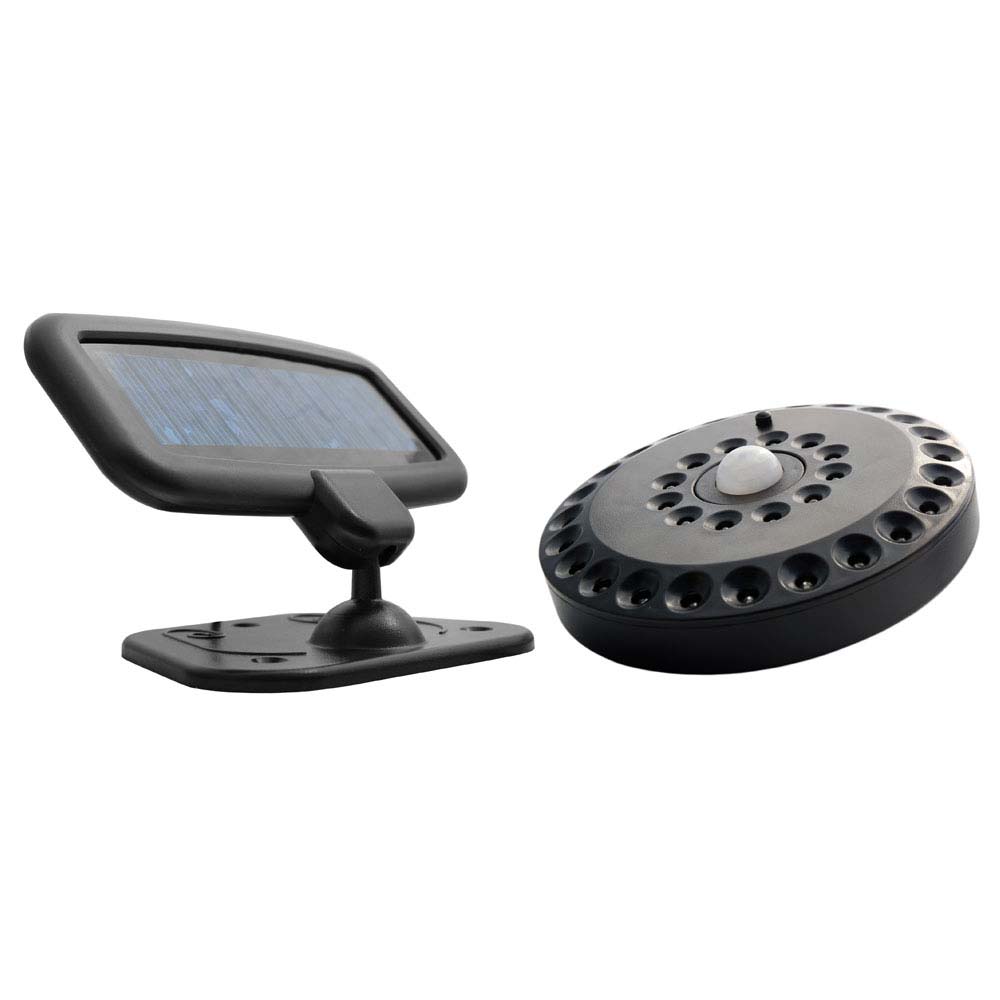 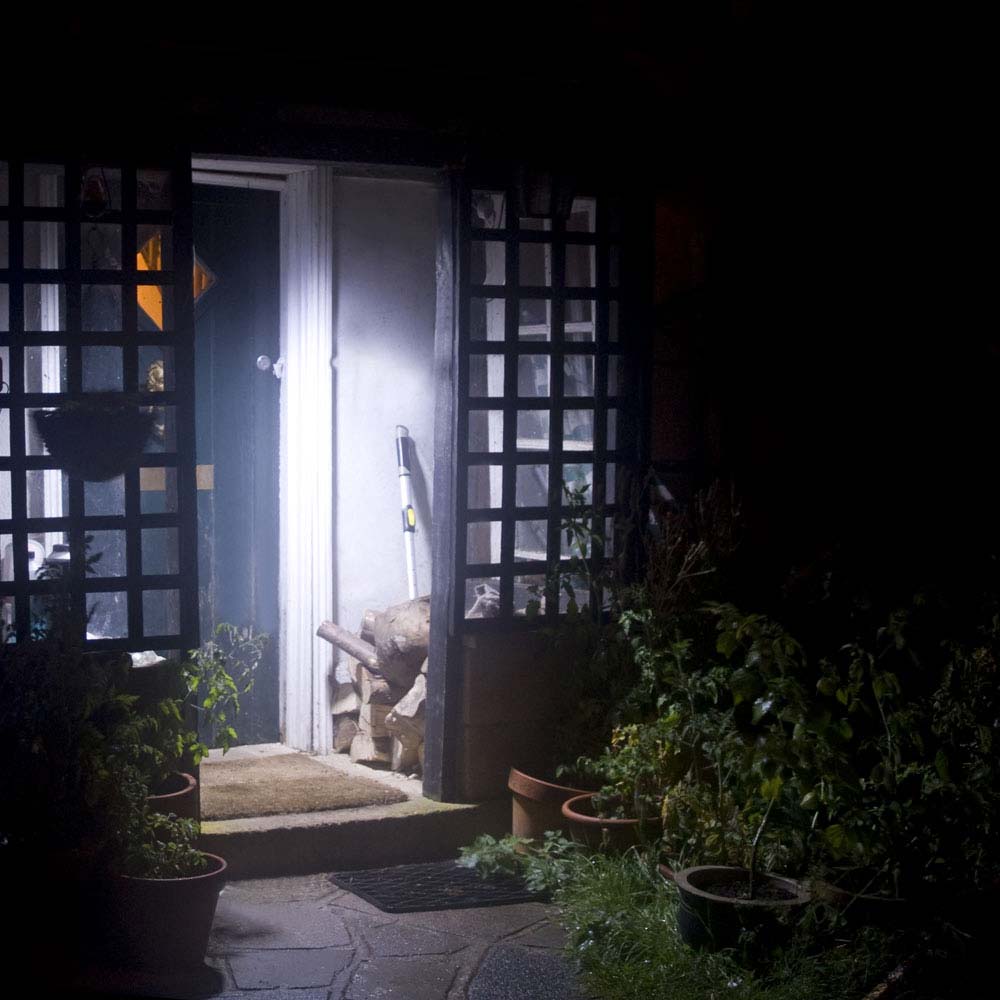 As this is a hybrid light a lot of people use it for a lot of different reasons but the most common is an entrance light. The light will activate as you get closer to the front door and enables you to find your keys. It’s also perfect for a shed or a bike shelter.

This is the most complex option but also the most popular for lighting areas that are quite large and don’t have access to a power source. Don’t worry though! As a general rule of thumb, if you can wire a standard household plug – you can use this kit. It is a little more involved than the previous lights mentioned on this blog and I’ll only go into the basics here as we could write a whole blog on just Geo Lighting Kits.

What can you use this kit for: we’ve had customers using them for a whole range of things from sheds, to stables, to Eco-toilet’s, etc. The options are almost limitless and because of how it all works you can modify it to make it suitable for your needs. For example: want it to work on a sensor: add a PIR, want more switches: that’s fine, need less/more bulbs than the kit provides: just include/remove one bulb. So long as you aren’t using more than the battery can store, you’re good to go! (We generally don’t recommend these kits for anything more than lighting and accessories for lighting. Example: using a power tool with this will put a massive drain on the battery as it was built only to light bulbs.) 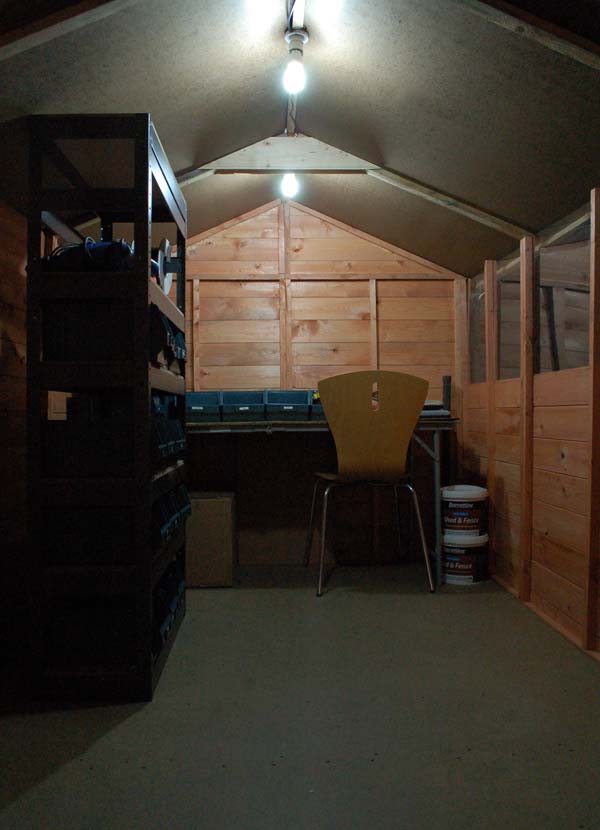 After choosing which would be applicable for you the rest is easy. The main set-up is: solar panel (on the roof or using a bracket), to fuse, to battery, to fuse, to light switch, and finally to bulb. Everything you need (apart from the tools to install it like drill) comes in the kit. The only thing you need to purchase is the battery (which you can do at time of purchase via our website).

Video on how to install a Geo Kit:

Checkout for full range of solar lights for home and garden.