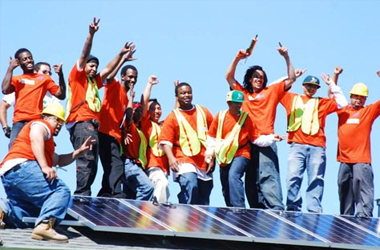 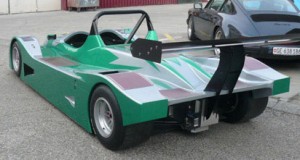 Excellent news you can now get Solar Christmas Fairy lights in a massive selection of colours. So there is no excuse not to be Green this Christmas – or red or yellow or blue because whatever the colour or length you require it can now be provide for.
Visit Solar Christmas Lights to see the range. 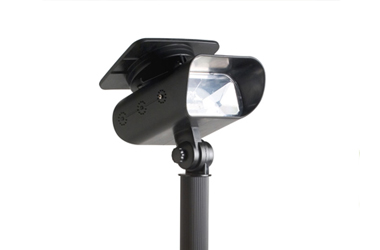 There are many solar spot lights on the market – some metal, some plastic, some bright some decorative. So how do you pick?

I have always believed that a spot light should be to highlight something, whether it a statue, a building or a tree.  However the majority of solar spot lights simply are not powerful enough – that was until i discovered the 8 LED Solar Garden Spot.  This really is a super powerful solar garden spotlight like none other on the market.

With 8 Bright LED’s all lined up in a row with a super reflective backing really make this solar light project over a great distance with a good spread of light also.

Now not everyone is like me, some would prefere a more subtle effect from their solar lighting but I don’t think i am alone in expecting the solar lights to work for 4-6 hours every night even in winter – in fact more so in winter as it gets dark earlier and not only do you need light for a longer period but it is when you get to show off your garden lighting for every one to see.  The Solar Garden spot is bright and does last 4-6hrs per night even in winter but if you want a slightly less bright light then my second choice would be the solar spot this again is trully a dusk until dawn solar light with amazing performance for its size – I would use this solar light for shrubbery and small garden sculptures it will light up a good 5 metre area though so still very powerful. 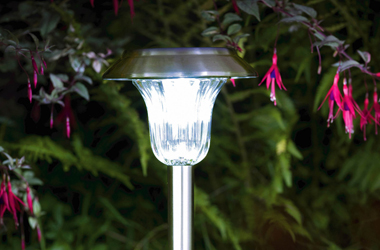 Want to know how to buy a garden light that will last all year round!

Dont know how to pick the right light for your needs?

I am going to try and help with this simple guide.

There are three main points to a light – The Panel, The Power (battery) and the Light (LED’s).

Most garden lights will have 1 (one) LED these are the sort of lights that are normally available as a set of four and are fairly cheap they are designed either to be decorative or as path markers. General Solar Garden Lights are available with 2 (two) LED’s through to 4 (four) LED’s. Any more than 4 LED’s and the light is either a solar spot light or a solar security lights and not meant to be lit all night.

Battery – generally the cheaper garden lights will have 1 (one) 600 mAh AA or AAA battery this can be replaced with a slightly higher powered battery if you want to, this will allow the light to last longer into the night during the summer monthes but will not improve winter performance. The higher the power of the battery the more LED’s it can power or the longer the light will remain on e.g. a light with a 1200mAh battery will last twice as long as a similar light with a 600 mAh battery.

The final piece of the puzzle is the panel and although their is a science it is not one that has to be given much thought. As a general rule the bigger the panel the more power it will produce. If you have a light with four LED’s 2 x 1200 mAh batteries and a tiny panel then you will find the light will probably work for a couple of nights but struggle to work beyond this. 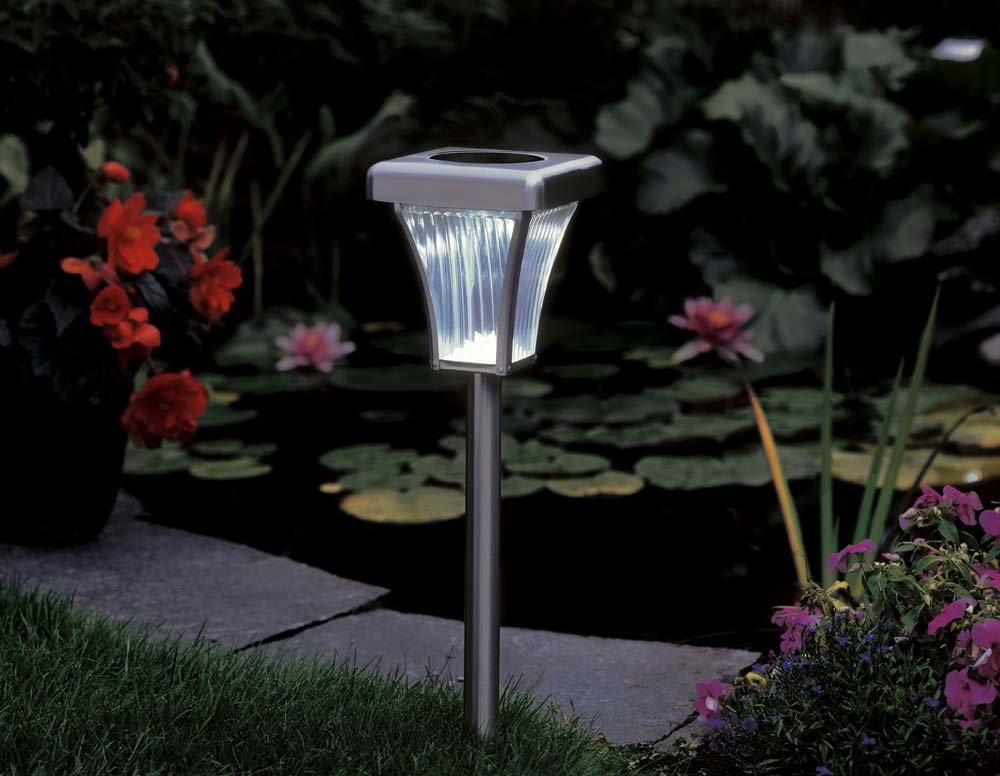 The more LED’s the brighter the Light.

The higher mAh figure the longer the light will stay on for.

The larger the panel the more power will be put back into the battery. 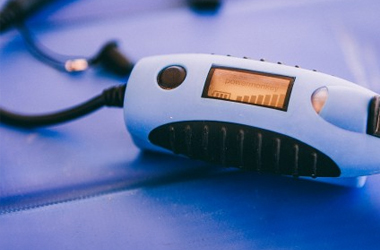 In 2008 The Solar Centre took part in a few festivals and exhibitions to see what the market wanted and what people thought in regards to solar.
The general comment was “solar does not work” and then with a quick Solar Phone Charger demonstration a number of people changed their opinions to “Solar is the Future”.
In fact at the Glastonbury Festival we had many people coming back to us with friends for them to buy one and buying more as solar Christmas gifts for friends and family.
It really was an eye opening experience for us to see the lack of faith in solar and for our customers to see how far solar has developed.
We tried to take a range of solar gadgets and solar gizmos to demonstrate that solar means a lot more than simple solar garden lights. We also wanted to see what people were interested in buying whether it was a solar toy for them or the latest solar gizmo for a tech savvy awkward to buy for friend. The results were pretty conclusive with The Solar Mobile Chargers stealing the show. 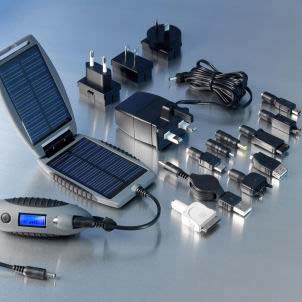 My favourite just for the record was the Power Monkey a bit more expensive than the Freeloader but far better when you needed a charger to rely on over several days and when you wanted to charge your ipod as well as your phone in one day.

Have you used a Solar charger?  What do you think!  Let us know your comments. 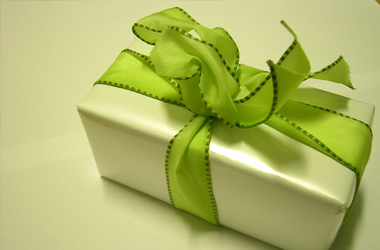 There has been a lot of talk about the amount of carbon that is produced at Christmas from Fairy Lights.

People being deterred from decorating their trees and homes for fear of being un-eco and being judged for polluting the environment and increasing their carbon foot print.

Just one house, on a 25-night bling binge, could be chucking out about 25 metric tons of C02. With something like five million houses joining the party, the environmental cost is mind-boggling. And think of the electricity bills. One enthusiast, Peter Thomas (whose spectacular housebling in Wales made the cover of Christmas Houses), admits to spending an extra £480 a year on powering his December displays (telegraph 19/12/07) 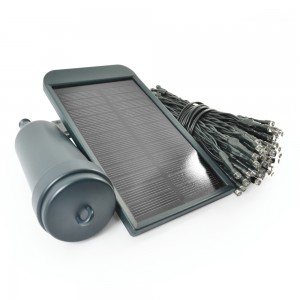 Well we do not need to worry any longer with solar powered fairy lights that operate for 20 hours when fully charged, even here in the UK we can be Green this Xmas and save money on expensive electricity bills too.

When buying Solar Xmas lights do be aware of lighting times and charging times as you don’t want to set your lights up for them to only work for a couple of hours each night.

So be Green this Xmas and buy Solar Xmas Fairy Lights! Roof tiles on the Paul VI auditorium are being replaced by 2,700 solar panels in move that will save over 200 tonnes of carbon dioxide being emitted every 2 weeks. 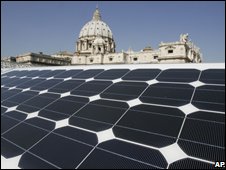 With a reported installation cost of £1.5 million the Pope is certainly lucky they’ve been donated by Bonn-based company, Solar World at no cost.

Surplus power will be fed back into the grid earning the Vatican a good chunk of revenue when it’s not being used to cool or heat the 6,000 seater hall.

Thanks to the BBC for this story. 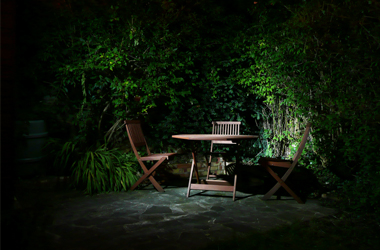 Nothing is more frustrating to honest solar retailers than the relentless flow of cheap solar lights available on petrol station forecourts and other retail outlets. We often take calls from customers who are keen to try something new, like a solar security light for example, but are having trouble recovering from their last solar light purchase which barley manages a whimper come dusk.

Some point the finger at China but this is often unfair as China simply manufactures to our demand. You can get great products from China and you can also get rubbish much like anywhere else.  More worryingly, others point the finger at solar itself as their ‘throw-away’ solar garden light flickers out its final flutter. This can do damage to the solar industry as a whole and also the wider environmental cause. Would you consider solar panels for your house if your only previous experience of solar was a garden light not fit for purpose?

The truth is that both solar and the Far East are capable of generating fantastic products and these products are readily available in our shop as well as many others and they needn’t cost the earth. It is our hope that as time moves on the questions will be about the difference between good solar products and bad solar products rather than the integrity of solar itself.