Question:
hello, are the lights warm or cool white ? thankyou
By YVONNE MCLAREN on Apr 25, 2021
Answer:

We do not recommend shortening the cable, this would be classed as modification of the unit and the one-year warranty would be void.

Question:
Hello Are the lights IPX6 rated? Thanks
By Linda Young on Nov 25, 2020
Answer:

They are able to take the general elements and withstand the rain, however we do not recommend spraying them with alot of water or at a high pressure as this could damage the lights

Question:
Is it possible to set a timer so that the lights will go off at a particular time so as not to disturb wildlife all night?
By Karen on Nov 25, 2020
Answer:

No, the lights do not have a timer.

Question:
My mobile phone charge up plug in cable does not fit the port on the green battery tube. What can I use to charge the lights up. I have tried my old mob charger ...but shape on the end still wont fit in the tube. Please advise . Thank you Linda.
By Linda Hollister on Sep 15, 2020
Answer:

We sell the cables here

Question:
I accidentally cut the light string. Can I just buy a replacement string. Thanks
By MAGGIE on Jun 7, 2020
Answer:

All our lights are made in China.

Question:
Hi, can these be used as USB only, with the solar panel disconnected? One of the locations I wanted to use these doesn't have space for a solar panel.
By Tim on Dec 3, 2019
Answer:

Yes, you can run these off the USB only and disconnect the panel.

Question:
What colour is the Lumify fairy light cable? . I would be putting them on an evergreen and would need green or transparent cable
By Karen Hart on Jul 10, 2019
Answer:

The cable is dark green.

Question:
Are these lights bright enough to light an exterior staircase?
By Mariann Gibson on Nov 1, 2017
Answer:

Fairy lights aren't really designed to light up objects so we'd suggest not using the likes of staircase steps.  Lighting a staircase for a visual effect would look great.

Question:
Do these lights come with a USB charging cable, or if not, what type fits? Is it the same type that I use to charge a laptop? How do I know if the USB cable/s I already have will be compatible?
By Viv on Apr 21, 2016
Answer:
They do come with an appropriate USB cable, yes.
Helpful?

Question:
I h ave just maybe a wall with glass bottles and want to put lights in some of them ,can you tell me the distance between each light.
By Michael Baker on Apr 15, 2016
Answer:
They are every 10cm
Helpful?

Question:
Hi Guys, I want to buy multilpe units of this 300LED lumify but I have had some pretty bad experiences with cheaper units so I am worried about quality price etc. Can you please confirm what guarentee you provide with each unit ? thanks
By Andrew Kiernan on Nov 9, 2015
Answer:
All of our lights come with a 12 month warranty period.
Helpful?

Question:
Can you please advise how long the lumify sub solar fairy lights are. I would like for a fence11mtrs. Thanks
By Pat on Nov 8, 2015
Answer:
The lights are along 10m of cable. It has an extra 2m without lights that goes back to the solar panel.
Helpful?

Question:
Are these Garden Fairy lights Super bright white
By Lily on Nov 5, 2015
Answer:
These are the plain white version, yes.
Helpful?

Question:
Hi, is there an update on when these will be available please?
By holly on Jun 28, 2015
Answer:
We are still expecting these early to mid July.
Helpful?

Question:
When are these going to be made available?
By Ralph Peart on Apr 6, 2015
Answer:
We are hoping to have these available in July. We are working on getting them finished sooner but cannot guarantee a date yet.
Helpful?

Question:
The panel on these looks the same as the panel that came on the first set of fairy lights I got from you in 2008. They lasted until 2014 but the Everbrights I got from you last year died within 9 months. Will these perform more like your first gen lights which were a lot better than your second gen ones?
By Bob Tilmore on Mar 27, 2015
Answer:
Many thanks for your question Bob. The short answer is yes. We've taken the best bits of our first generation fairy lights and second generation Everbright USB lights, removed all the problems and the result is Lumify. Our first generation lights were brilliant, but as you may remember the battery pack was non-standard which caused a few problems. We also found that when customers accessed the battery pack to change the battery the waterproofing was compromised when the control box was screwed back together by the customer. Lumify deals with all those points. The battery is a Lithium Ion 18650 which are widely available. To change it you just unscrew the cap on the control tube, flick the battery compartment lid with your thumb, swap the battery and screw the tube cap back on which takes around 10 seconds. We based the tube design on a plastic bottle and that is precisely the sort of waterproofing you will get! The other issue with both our first and second generation lights was that they both used a click button so you never knew if the lights were set to on or off by looking at the switch. Lumify has a 3 way slide switch which has S for standard mode, P for Powersaivng mode and off for well, off. Lumify also has the USB charge port which we pioneered on our Everbright USB lights and we've added Powersaving technology which wasn't a feature on either of the previous sets. If you liked our first generation lights, as so many customers did, you will love Lumify!

I'm sorry you had problems with your second generation Everbright set. The vast majority were fine, but if we're being honest, these never quite lived up to the standard set by our first generation lights owing to problems with the factory we were working with at the time. Initially we had issues with the AA batteries we were using and we also had issues with the LED strings. It was also a bit of a faff to replace the batteries with the bung and the screw base design we were using. All these issues have been resolved by Lumify.
Helpful? 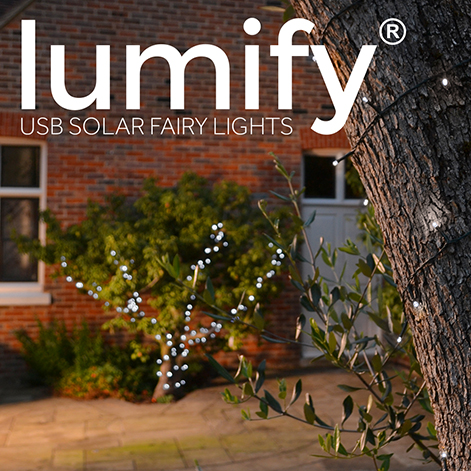